Best Condom votes are in! 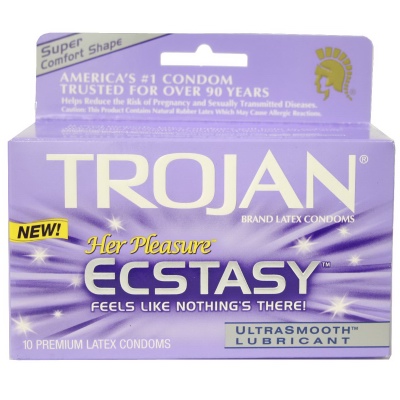 As I recently received the question “Which are the best condoms for girls?” I really didn’t have the best answer for that. That is, I wanted to get the answer from multiple girls because obviously what one person uses may not be what another likes. So I went about asking multiple people, some of which thought I was crazy (these people being my friends) but others divulged as if it were their job to answer these kinds of sex questions in order to better the community.

I must say there were quite a few answers that both made me laugh and I just thought were plain interesting. I will post some of the best answers at the end. However getting into condoms for girls I had the most hits on Trojan Ultra Thin and Trojan Her Pleasure. I also had a ton of girls and guys say they didn’t care as long as they were spermicidal. Spermicidal? Yea I didn’t know about these but apparently these condoms have Nonoxynol-9 Spermicide on the condom for extra protection against pregnancy. So when I looked at the Trojan site you can get Ultra Thin and Her pleasure as regular condoms and as spermicidal. So why would you even bother with the non-spermicidal condoms? Wellll it does say on the site that these spermicidal condoms are not for rectal use (?) or more than once-a-day vaginal use. However I did ask my friends who had vouched for this condom- if they had ever had any problems and they all claimed they never experienced anything bad using them more than once. Another big hit were the Trojan Ecstasy condoms, a few girls, almost getting excited to tell me about their pick, said they would use absolutely nothing else. So I don’t know if that helps at all but those are the facts.

As for guys- obviously the majority of guys said they used Trojan Magnums. I just happen to think this is funny because ladies- please think about the guys you’ve been with, and think about the percentage of guys you would say qualified for a magnum. Hmmm yes, probably no more than 50%. So besides my big time big stick ballers answers, the majority of the guys ALL said Trojans, guys weren’t as specific as girls but I got a lot of “Ultra Thins” and “Spermicidal”. Honestly I think it is harder for girls to reach the same spot that guys can so as long as you find a condom that you don’t lose sensitivity with, let the girl pick. In the end as long as she’s pleased, I know you guys- and that alone helps you. So all in all it might just be better to get the ones I wrote about earlier that the girls dig. 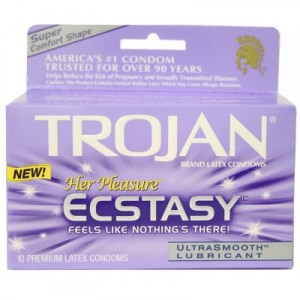 Trojan Ecstasy for HER.. and Him. When she's happy you will be too.

Also; on another note, the other day a guy was telling me how a girl he dated had said she was allergic to latex, further insisting he get checked because she couldn’t use a condom. I find this incredibly interesting/ slick. First of all, the second I went to the Trojans website there was pull down menu for [Latex, Non Latex, Vibrations etc.] So obviously even if you are allergic to latex, you can still have fun and stay safe. Pshh. Then it dawned on me that this girl might have actually had a method behind her madness. What if she told the guy she was allergic to latex just as a smooth way of getting the guy tested?? I mean that whole conversation is definitely awkward, and I think that if there was an easier way to ask, more people would be getting checked. I mean honestly the cleanest person could have crabs for all you know- gross. Soo ladies and gents if your looking for an easy way to tell your partner to get checked this is a pretty slick move if you ask me. 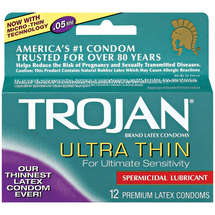 Trojan Ultra Thin Spermicidal For those too young to be baby makers.

Some of the best answers I got:

“I like ONE condoms because they have cute sayings on the wrappers and there’s a variety!”
[Hmm I can just see a girl getting excited to see what the wrapper says. Only a girl]

“I can really give shit, it’s a balloon on my dick, but I usually just stick with Trojans”

“Guys are so weird” –Alexis 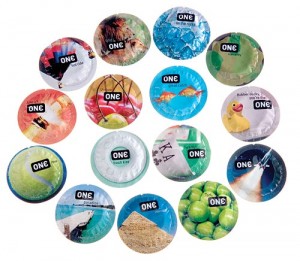