Can you roll at STURGIS? 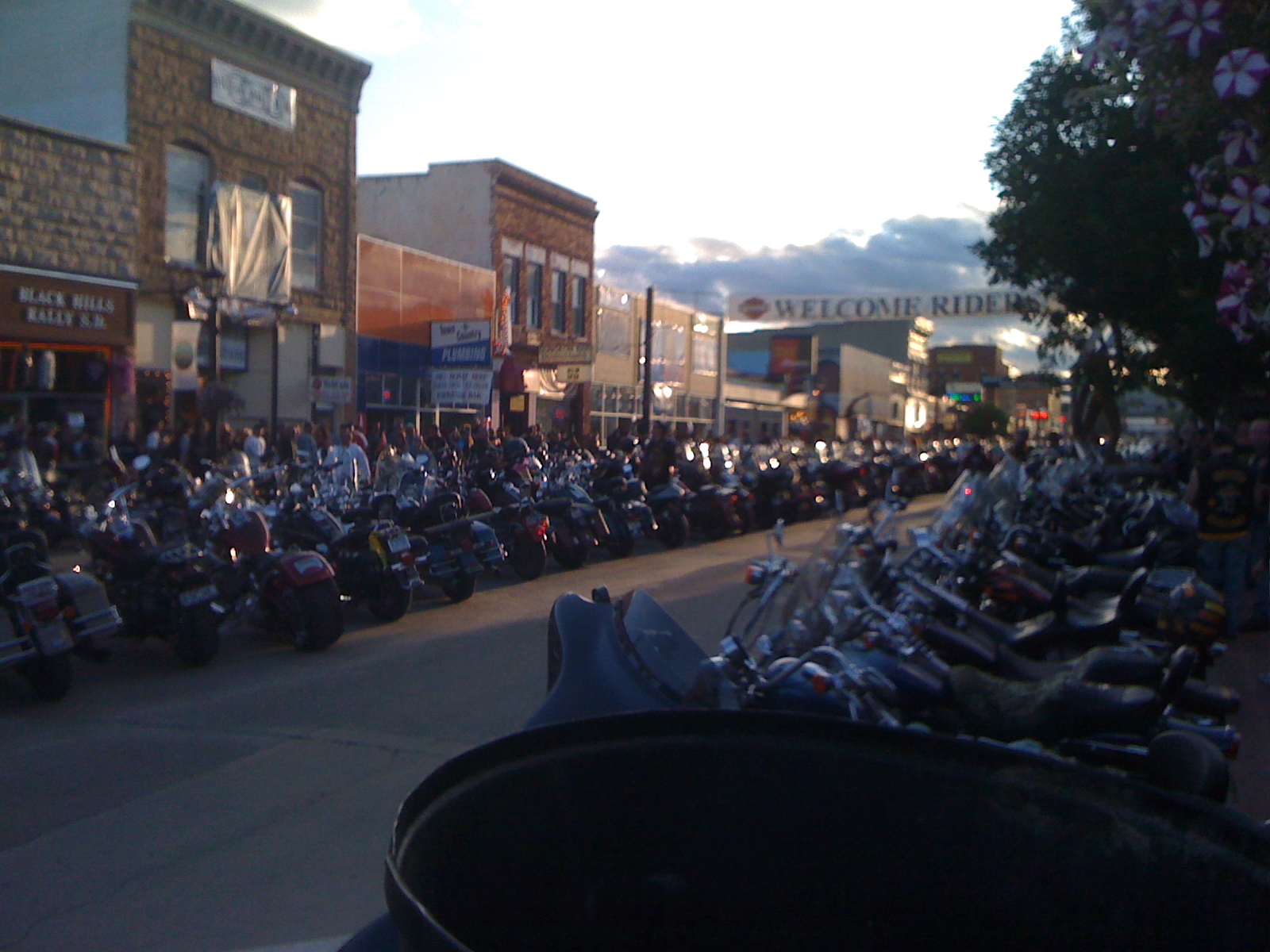 So if you aren’t one of my co-workers or close gal pals or brotha’s you probably haven’t heard of where I am right now…. In Wyoming. 🙂 If you do fall under one of the above you probably have heard me ranting about my upcoming family vacation to Mount Rushmore/ Wyoming. To be honest- family vacations in my family are always very interesting to say the least. I mean honestly the last vacation we had to a place with so many natural reserves and … space as Wyoming was when my father booked a trip to Canada- which at one point we ended up on a 3 hour horse ride up the side of some Canadian mountain with 4 incompetent, hungry and gassy horses. Not exactly my cup of tea. Futhermore my brother and I had no clue what we were getting into- all we were really told was that we were going to see Mount Rushmore….. and we were going to be gone for a week…. ? Oh and by the way my brother and I just got out of our treacherous summer school courses, and as he will go back to school in one week I will be thrown back into work in LA. We said goodbye to the rest of our summer as we entered bag check at the super snazzy Long Beach airport.

Now it wasn’t until we actually got to Mount Rushmore that we realized this actually was going to be a better vacation than we had perceived. Obviously we went to see [the men who built this country from the ground up] their heads in granite (Yes- Mount Rushmore is pure granite 🙂 ) And while we were there I couldn’t help but notice many, multiple, thousands of BIKERS? I am talking about full on leathered, badass, tattood motorcycle BIKERS. It was like I was 9 and just made it to the front of the Legoland mini cars ride line. I was ecstatic- Nothing I had ever seen before.

I remember a friend mentioning this “biker rally” to me a few weeks ago in Vegas as I complained about seeing the godly heads of South Dakota during my families summer vacay. When she told me about the biker rally in August, I sort of brushed it off thinking it was going to be some Lance Armstrong wannabe hick bike ride through the grass…. I honestly had NO clue. My blonde brain was clearly not on the right page.

However this “Biker Rally” called STURGIS is like the running of the bulls in Spain. Like the US Open Surf of California- Like the Susan Komen walk of San Francisco- it is BADASS. And not just the badass cooool, this event is literally the birthday or should I say the Christmas for bikers everywhere. It is honestly this rally that bikers come to from all over… some ride their bikes across multiple states, others who just can’t handle the bugs in your teeth/ wind in your mane kind of ride shipped their bikes then cruised around for the week blowing gas. The one time I went to Pamplona running of the bulls in San Fermin, Spain- I just remember people in white… everywhere, everyone wasted, crawling into bars, pissing in the streets and singing spanish old school chants. Well, Sturgis was pretty much exactly the same if you were to just switch out a few things. At Sturgis everyone was in cowboy/ biker gear, hiking boots, cowboy boots, people were still crawling into bars and pissing on the streets, but instead of singing spanish chants these people had bugs in their teeth and had competition in their eyes. I am telling you, these guys DO NOT mess around.

The whole weeklong event had a ton of artists performing some of the bigger names were Motley Crue, Ozzy Osbourne, Kidrock, Dave Mason, Scorpions, Bob Dylan, the Doobie Brothers and ZZ Top. Besides the hot jams they had some badass things going on for everyone. Obviously they have a huge burnout contest everyday then they had wet T-Shirt contests, best tattoo, beer chugging contest, a burlesque show ;), they had a mechanical BUCKING bull …? hmm, a motorcycle rodeo contest and … pAHAHAHA….midget wrestling. The streets were lined almost like a carnival with all the bikes lined up in the streets, all streets were blocked off and then there were bars, food, biker stores, harley davidson shops, leather stores, ice cream places, jewelry shops. Anything and everything…. CORN ON THE COB stands… Yah i flip videod a few fools trying to eat that stuff.

I really can’t even fully explain the things I saw or felt at Sturgis. It was definitely not an event meant for anyone under 18 if that. Just like the gangs of any city, there are also these “biker” gangs, they roll together and die together … pretty much. There are some big names I ran into…(literally) Hells Angels, Los Bandidos, Mongols, Sons of Silence and I even spotted a few Outlaws. The one thing I learned at Sturgis was really how serious these biker gang members were. Some of them had these patches on their jackets that read “1%” which referred to the 1% of society- the outcast, the rebel rousers. The ones you didn’t want to mess with. It was uber fabulous when I decided to take a picture of some of the guys because I thought they looked cool, after one member shot me the look of death my mom waved her arms around and tried to apologize on behalf of me… at that point I was confused on what was even the problem until a lady leaned in and told me to ask before I took any more mug shots. A few seconds later one of the guys I took a picture of.. a “bandido” just grunted and said If I wanted a picture just ask… then I asked… and I got my shot 🙂 Muhahaha.

Besides these rebel rousers there are definitely other bikers that come to Sturgis- I mean shoot Look at me! I took a picture with these nice Canadian bikers, didn’t really look harmful but hey do I look like a bitch? So there’s really no way to tell. Buuut, just scoping out the scene was AWESOME. I seriously recommend the yearly event to anyone. I am huge on trying new things and really getting out there and seeing it all. If you can plan a trip to South Dakota/ Wyoming in August with a bunch of friends I could see it being a ton of fun. Do it. 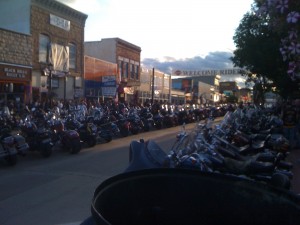 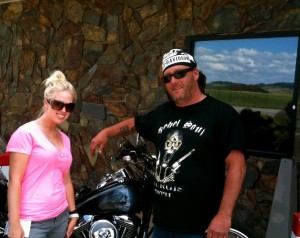 Me and my Sturgis biker friend from Canada.

Just one of many interesting license plates at Sturgis- McK1LZ 🙂