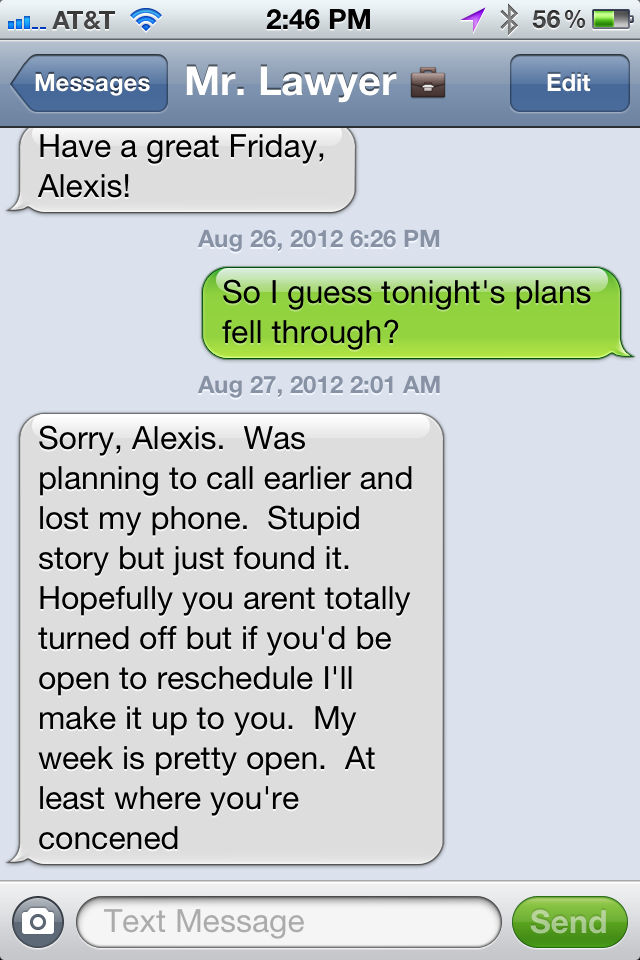 It was two Sunday’s ago that I met a very high profile celebrity lawyer at an anniversary party. He was very nice, clean cut, talkative and good looking. He had what any girl would initially look for in a guy, but as I quickly found out— no real sense of dating courtesy.

He first emailed me the day after the event, we talked on the phone a few days later and he being the forward one, made plans with me for Sunday.

Sunday arrives… 4pm passes… 7pm rolls on by… no text, no call, nothing from Mr. Lawyer. I finally text him letting him know plans weren’t going to work… still nothing. That is…until 2am, I receive the text below. 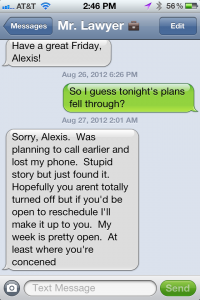 To make matters worse, in addition to the 2am text, I also received a call from Mr. Lawyer the very next day, a very detailed message about how he had gone for an adventurous bike ride with his friends at 12pm, ended up back BBQ’ing and drinking with his friends, played a college drinking game and passed out by 4pm. Let me add, this guy is in his late 30’s/ early 40’s…. You were playing a college drinking game with your friends? You really REALLY should have lied to me about that because that alone makes you completely undateable. I’m pretty sure when I was in high school babysitting for families, the dad’s weren’t out playing college drinking games. They were at bars… talking about work, their wives and I’m sure their problems. But not playing power hour.

Anyways, great story bud. Obviously I didn’t remotely cross your mind for a second Sunday so why waste your time? I completely understand how being with the buds and doing the bike ride/BBQ/ drinking sounds like a blast, but you should have just shot me a text at some point to reschedule.

In regards to the text he sent: You lost your phone? Maybe a better question would be did you break your fingers? Because as far as I’m concerned you asked ME out. You called to make plans with me. And let’s not forget you had my e-mail to start! If you really thought highly of me, this would not even be a post right now.

And while we do live in a time period where women really need to take more initiative into their relationships, I think the first contact when dating needs to be on the mans side. Men are competitive by nature, and they all like a little bit of a challenge. I’ve gone on enough dates to know by now, if he’s not pursuing you for dinner and drinks etc., (at least right off the bat) I will tell you right now, you’re not really a huge interest in his life. If you are on the dating scene, not hook-up, this is an important consideration. His main priority may be work, and that’s fine. But if he’s not making the plans with you from the start, don’t expect for things to change anytime soon.

I personally put a huge effort and amount of time into all of my relationships, and the people I want to see; I follow up with, and constantly take the step forward to make plans with. Don’t be that desperate girl that makes excuses for these guys from the start. If you truly believe you’re worth finding an amazing man, you won’t let yourself be some guy’s side dish from day 1.

DATING ADVICE FOR THE GUYS: I know this dating thing is hard on you guys, sometimes you probably feel like you can’t ever seem to get the right girl or make that one girl happy. I am sorry, girls are difficult, but knowledge is power. The more you learn about women and the more you know, the more leverage you will have.

So in the case of the example above— you decide to start drinking with your buds on Saturday… you have a date with this awesome girl later that night…but the drinking games you thought would be short lived are really turning into college fraternity Olympics. You can’t possibly imagine putting down the dodge ball and sobering up for your date, I mean you don’t even get to see all these guys all that often.

As women, we get it. Most of us are the same way. The difference between you guys and us girls is we know how to handle these situations better via text than you boys do. It’s called the re-schedule text. DON’T send a text to reschedule an hour before. Bitch please. You send a text to reschedule a few hours before- 4 hours at the latest. DON’T say you’re playing on the slip n’ slide with the boys, in conjunction with round 3 of power hour to your bro’s Kaskade playlist. That is not going to fly.

Now, I’m not telling you to lie either. With social media these days, there’s a chance we may find out, and that could ruin it anyway. Stay out of the detail! A simple text saying “Hey, something has come up, are you available to do dinner on Tuesday or another night this week”? Will do fine. And boys, boys, boys, “I’d love to make it up to you” already puts you in the doghouse without her even saying so… so don’t ever say that!

As for Mr. Lawyer, I probably won’t call him back. I know what I want and what I want is a guy that looks forward to seeing me! Plain and simple. A guy that respects my time enough to just let me know if he can’t make it… not shoot me a text 9 hours after our proposed plans. On to the next one.