Did I really just use Loreal VIVE Pro for MEN??? 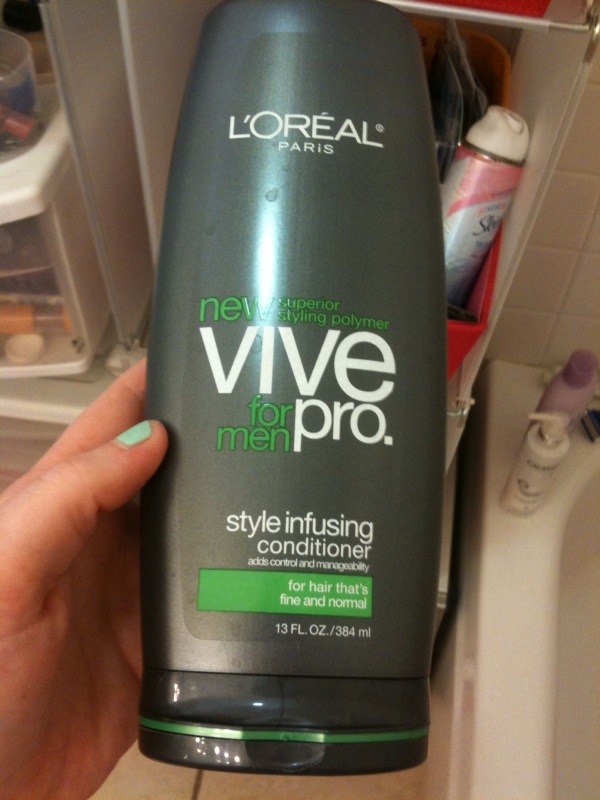 In the past numerous people have told me that I rarely cease to amaze them… trust me though; the truth is I amaze myself. Sometimes I know that I am the biggest joke, but admit it, you know you wish you were I. So this past weekend my friend needed to make centerpieces for an event, so of course where else would we go but the DOLLAR TREE? I was slightly in amazement/ shock because I had never heard of the DOLLAR TREE until the day before when some dollar tree guy was on Jerry Springer trying to confess his love to (what he didn’t know to be) a tranny. So at this I was slightly amused. Anyway, while we were there I had remembered how I desperately needed more conditioner. So, as we were going to ring out, I grabbed a L’Oreal VIVE Pro conditioner for $1. I was stoked- I mean I thought shoot this is a good conditioner, and I just got it for a Dollar!!

When I got home and went for a run, it wasn’t until I went to shower that I realized I didn’t have my conditioner—– come to think of it… did I even grab it after I bought it, or did I leave it where the lady bagged it??? I knew my best friend would completely make fun of me if I told her I left it, sooo I just forgot about it. UNTIL yesterday when my friend told me she had it. THANK GOD. I have never been so relieved. Unfortunately, the problem lies with the fact that this conditioner I bought was really L’Oreal VIVE PRO for MEN!!!!! aaaaaahhhhhh!!!! I am so blonde. After I realized it smelled like men’s cologne my first reaction was that the stupid Dollar Tree was hankering with their conditioners and they gave me something weird. Why on earth I would ever think that the Dollar Tree put other cologne smelling conditioner in the L’Oreal bottle is absolutely beyond me. I finally looked at the bottle and realized I was the deluded moron and that I just had not read the label… at all. Biggest joke of my life. So now I am still out of conditioner, my hair smells like Johnny Depp and I feel like a tool. Cool.

However, the one thing I did get out of it? If you’re a guy and don’t like wearing cologne I definitely recommend trying a men’s type of conditioner… and OBVIOUSLY you don’t have to spend a boat load on it because even I was able to get an awesome brand at Dollar Tree 🙂 I mean us ladies love when you smell like a man- no not B.O. kind of man, not like Tarzan, but like a just shaven, sleek, hot man. Girls dig cologne. But I do know some guys who either forget it or just don’t like wearing it. OR if your pretty active or an athlete, and don’t want to throw-up running around from your musk each day, this would be perfect for you. SO, if you do fall under this category, I would definitely take this recommendation.