Kathy Griffin gets VAJAZZZZZLED!!… and then gets a PUBLIC pap smear??!!

Thats right, Kathy Griffen is officially Vajazzled. But has she been vajazzling it up for the right reasons? Hmmm… In order to promote cervical cancer awareness and the available screening tests (pap smears) she convinced the producers of her show to allow her to do a public pap smear….. and televise it via her EMMY NOMINATED show “My Life on the D List”.

On the Chelsea Lately show, she explained how it wasn’t easy by any means, convincing the producers of this event…. (Uh… ya think? Why DID they give in anyway??) But she claims she wanted to make sure she didn’t turn off any of her gays which is why she took the vajazzling route. Apparently the event took place at the Palomar Hotel in Westwood.

Now as I always say, I could be completely crazy, maybe it is a genius idea for cervical cancer awareness. I am sure there are a larger majority of girls who go in for their pap smears, not entirely knowing what the purpose behind this awkward procedure is. But people, the fact that we as humans came up with the technique of vajazzling just goes to show how creative we are. Lets put that creativity to use in the proper way… not through this public paps business.

Another issue with this whole idea is the fact that she got this procedure done IN public AT a HOTEL. Now as you may know, I am not against vajazzling by any means… or pap smears but having your snapper bedazzled at a hotel? and then getting it checked for cervical cancer?? Hotels are public places where children scamper around, people are IN MEETINGS? I love Kathy Griffin but I am starting to wonder if this whole public cervical cancer test is going a little overboard. I understand cervical cancer and prostate cancer can be lethal if not caught early on. It is a serious issue, and there are many individuals who are both uninformed or careless.. or both. So I do understand that as an individual in the media, KGriff would think that her actions would speak louder than words, and maybe she could make an impact. But are there not any other ways to get the message through to the public besides having a PUBLIC PAP SMEAR? Thats disgusting. Do you think any of us want to see OR even hear about some man getting a public prostate medical exam…. I will answer for the majority. NO! So please Kathy we would love to see your vajazzled vaj but please save your pap smear plethora for the docs eyes only. Thank you! 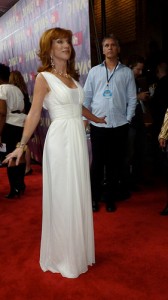