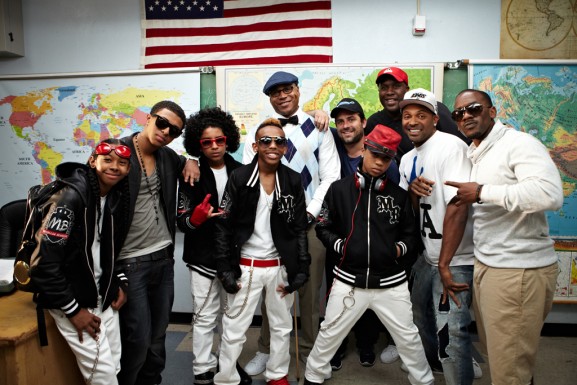 I think these guys line up side by side to Willow Smith. I am hands down; hooked. Over the summer I read an article in the LA Times about a young male group that had been gracefully making their mark in Los Angeles. I didn’t think much of it, I mean we all know there are a ton of small groups popping up all over this state everyday. Although I didn’t pay much attention to the group….I did remember the story. It wasn’t until about a week ago that I heard a new song on the radio that caught my attention. I knew immediately it was a young group, but had no idea who the group was. Ended up it was the same group I had read about just a few months prior in the LA Times- Mindless Behavior. A group consisting of four young TEENS…. as in early teens…. Think 13 ;). My favorite of the group? Ray Ray. How could you deny that smile? SO CUTE.

The most refreshing thing about this group is that each boy has their own signature style. They each set their own standards, look and preference. It’s great to know that there ARE still groups out there that can act as positive influences on their peers. For those of you from my generation, our heart throb band was Backstreet Boys and N’Sync. There haven’t been too many others that have emerged in a positive light that have grown with their fans over the years. I would love to see a group like Mindless Behavior create a similar image and message for the younger audiences. It is truly unnecessary for kids their age to be listening to slap happy tracks based solely on bitches and hoes from King Kanye West and Lil Wayne.

The song I had heard on the radio “Mrs. Right feat. Diggy Simmons” is awesome. I seriously wish I was still fourteen so I could hang posters in my room and try to make it to a concert. It’s like the male version of Willow Smith. The song is catchy and the video is … well for someone my age- I’ll just say adorable. I’ll try and post more songs and info as I uncover it on this boy band.