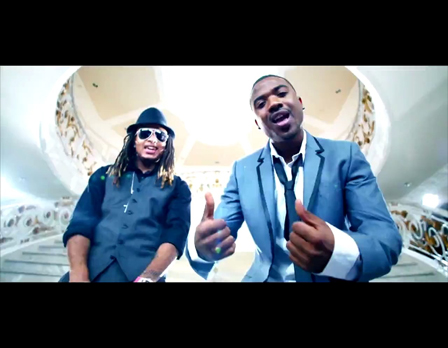 He has the hair like Lil Wayne, the same jeans as New Boys and has the same beautiful girls hanging on him as Usher. However, he has an unmistakable baby face, his sound spans more than one genre of music and his biggest hit? Oh, you were shaking it at one point to his single with Ray-J last weekend.

His name is Bobby Brackins. With about six years of music experience under his belt and even less industry work, Brackins has already bypassed billboard artists with his experience, collaborations, unique sound and thriving dedicated persona. Talk about the epitome of the saying “keep it pushin’”. What started as occasional visits to the recording studio where his father worked has turned into daily studio sessions in which Brackins writes, records and articulates new radio hits. Not to mention this is Brackins second whirl at the music game, this time as a solo artist. His first was during his time in the Bay area group Go-Dav, “Ride or Die Chick” ringing a bell? Unless you’re one of those people who solely listens to Pandora or the top ten iTunes hits, You’ve heard this jam. Similar to the other young, successful artists leading the way with this wave of new music, Brackins has learned the ins and outs of getting to the top of this industry. These ins and outs do not include riding on the coat tails of the artists who’ve already paid their dues. I think it is safe to say Brackins was never the type to saunter around on the right side of the stage at the Lil’ Wayne concert in hopes of attaining Rap recognition. When I say ins and outs, I am talking about the business tactics and music knowledge often times the managers must emphasize for their new artists. Brackins knows how the game works, and what it takes to get ahead and he does this all on his own. Working his way to the top, Brackins focus on his future is clear, and the networking, interviews, press and PR needed to push his music, is an obvious business tool few artists understand as important today.

While Brackins is already sitting on a Billboard hit, that isn’t stopping him from making all his future tracks perfection- constantly shooting for another radio hit. While his first major song, “143” featuring Ray-J floated on the Billboard charts for quite some time, “I’m Ready” featuring Marc Griffin from the 2AM Club was recently released as one of the tracks from Brackins upcoming album titled LIVE GOOD. While the record is set to release in the spring of 2011, there is a mini album preview, which was released TODAY under Universal Republic Records, which includes four hot tracks. The songs on his mini album also feature talented artists such as Ray-J, Marc Griffin, Dev and The Cataracs. Some other hits as of yet, not available on iTunes have videos up on YouTube. To name a few; “Skinny Jeans” and “Mobbin’” featuring Dev as well as “High Profile” featuring Paul Wall & Ya Boy. While many of these artists are part of the new movement, their connection and work with the stable and experienced artists such as Paul Wall always make for the best tracks. Come on, of course you remember [rob the jewelry store and make me a grill] “Grillz” by Nelly featuring Paul Wall, Ali & Gipp. This is just a quick insight on the talent Bobby Brackins as an artist, has surrounded himself with.

I probably first heard the song “143” when it was released back in May. No doubt, I heard it plenty while out running about the L.A. scene somewhere. Did I ever make the connection between track and artist? No. There have been so many new hits taking the charts it makes my head spin. Some that will hold their own against legendary artists, others whose existence will fade in history without the slightest mark searchable on Google. As I am sure I sang along like I was THE artist behind the music, what I didn’t know at the time was the meaning behind the song. I mean, today some songs chorus makes it all too clear it’s meaning [I met her in the club, then I said wassup… that’s why I toot it and boot it] as in “Toot It and Boot It” by YG. But when your chorus is [143], it changes things up quite a bit. It wasn’t even until about three months that I was told the 143 meant I love you in old-school pager talk. I guess it’s my parents’ fault I missed that whole pagers decade. This finding closely paralleled the moment I realized men were attracted to women with boobs, it all made sense, and made me somewhat giddy at the thought. This concept of 143 is completely different than any other creation I have recently come across. The song is about modern age love, a few numbers with less serious of a meaning that was taken during old school pager days, now leading the way as a term of endearment. Just like the studies and statistics that have been published in regards to people today getting married later and waiting to have children, new love is what comes before the whole courting stage of romance. As I have said in previous interviews, times have changed tremendously, lust and love today is more playful than serious, which is what we thrived on for the past century. I mean, I couldn’t necessarily imagine Prince Charles saying ‘143’ to Princess Diana. But newly engaged Prince William is another question. We all know a club is the last place you will meet your one and only, but when it comes to some fun, playful love interests, clubs are the stomping grounds for this. And so, 143 comes into the picture. If you receive a ‘143’ text, it is a given that the power player sender isn’t ready to settle, for now they are living on experience, they know exactly what they are doing, what they want right now and what they will want eventually. Unfortunately, while 143 has a light meaning today, there are still those who mix up its context with something more serious. In Brackins other hit “I’m Ready” it is about making a good night with friends and the girls who make it clear they are ready; ready to have a good time, ready to let go and ready to have some fun. Take note, if you are one of those ladies who wear close to nothing to the clubs and play at another table all night, if you’re not ready, a better place for you would be at home.

A New Genre of Music

On another note, if you saw my last interview, it is the boss- NicNac from Starting Six who is the man behind the music, producing the music heard throughout the interview (“143”, “I’m Ready” and “Good Good”) along with a few others. The sound is hip, fun, motivating, carefree and optimistic. His lyrics are all about– you’ll never guess… Living good. His songs loosen you up and are all about carrying an upbeat attitude, having fun, living a little, loving a lot, taking chances, not going to bed alone and fully enjoying success. More often than not artists write about what they see or how they interpret something. Drawing from his own life, Brackins chooses to interpret the highlights, the positives and the bright outcomes he has experienced from hard work. Bobby Brackins and his music differ greatly from other mainstream artists today for a few reasons. Primarily, his music does not fall under a degrading category, so apparent with new music today. This music created by both male and female artists can be extremely degrading towards women. Obviously, the periods are constantly changing- that is a given, but the message relayed in music regarding women as no more than ass-shaking high class hoes is like the shot heard round the world. And we wonder why girls stopped wearing clothes to the clubs?

When it comes to Mr. Bobby Brackins, I know there are only more surprises to come. When you find an artist whose lyrics teach you something you don’t already know, that is artistic creativity, ability and talent, all quite obvious from this interview. Whether you are a manager, friend, relative or 143 “it” girl, I hope you take something away from this interview you didn’t already come into it with. Below is the recent interview with Brackins as well as a few hits you will have on your party playlist before you know it.