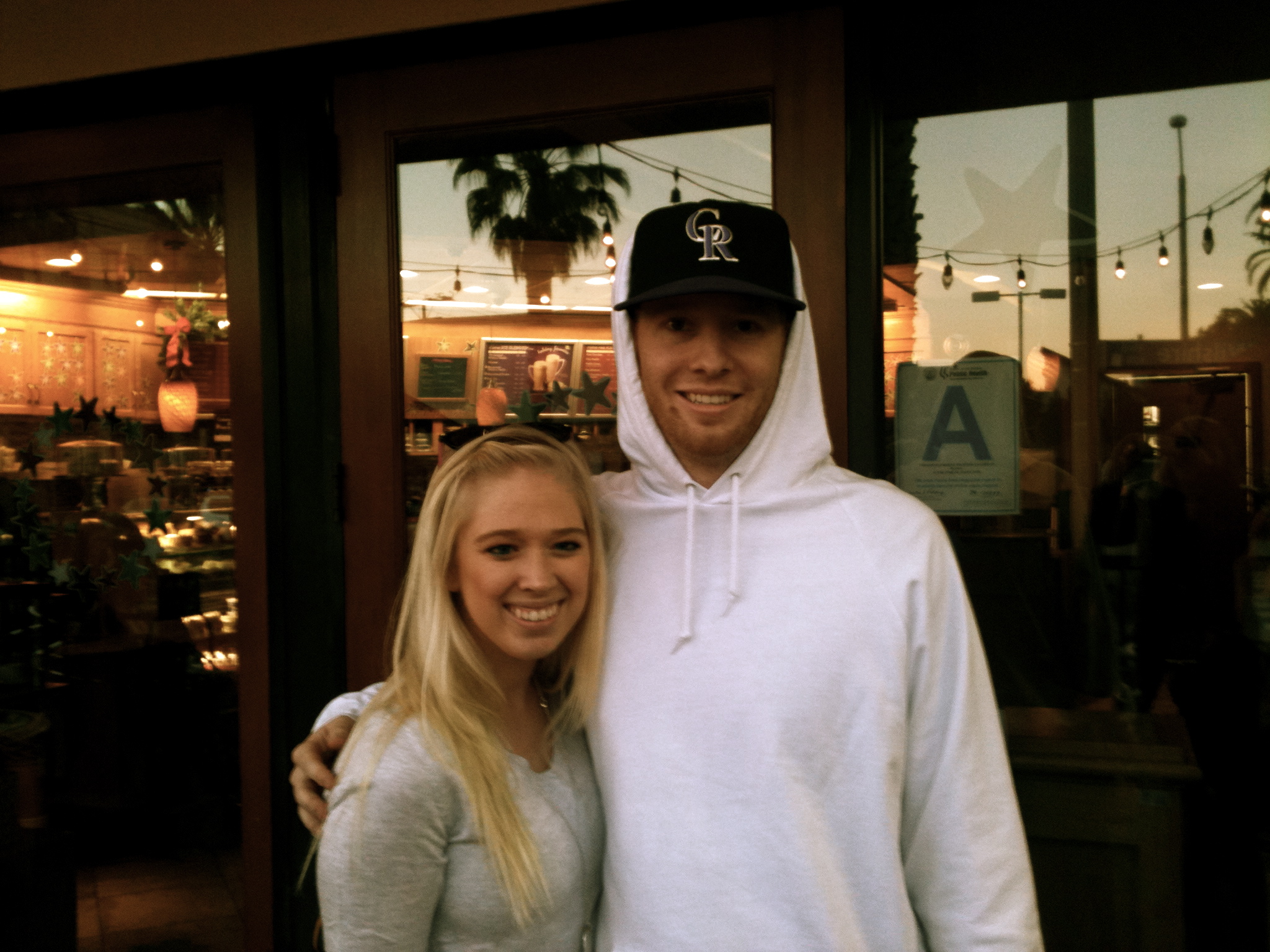 A USC graduate, good looking, sharp as a whistle, played ball, now a music producer… the guy in college that everyone knew. What started as a hobby in high school blew up when he created a notorious remix to the Trojan Fight song. He is what us girls consider the total package- So with that said would you believe he was once told he’d be paralyzed for the rest of his life?

I know, hard to believe right… He doesn’t look like he was once paralyzed, and he certainly doesn’t act like it. Mike Mac has a very compelling story, one that takes a loss and flips it for a win. Today, Mac is eager to help others by contagiously affecting them through his music. While each day is a battle for Mac, he keeps things real with his strength, talent and lighthearted attitude. The details of Mike’s accident are important because of how his music has developed due to circumstance. Pain, happiness, fear, anguish, hope, love and triumph are some of the emotional ties Mike creates within his music which he draws from past experiences and feelings.

It was during his sophomore year in high school in which a low bridge accident during a basketball game developed into an antagonizing pain. Mike thought little of this pain until he ended up paralyzed in the hospital in January of 2003 from two torn ligaments and a six-inch blood clot pressing on his spinal cord. At that time, fifteen-year-old Mike Mac had the world ripped out from underneath him. His dream of playing basketball for a Division I college team and later for the NBA was shattered. Mac couldn’t move from his chest down to his feet and had zero grip in his right hand. And yet this is what makes Mac such a powerful music producer.

We’re all caught looking at the past and wondering where the time went. For Mike Mac looking back might seem a little blurry, almost as if everything happened over night. Just yesterday (November 2010) Mike was competing for Beast of the Beats IV in New York… Today? Mike is in the studio making dreams a reality for a handful of artists, a few of whom have been ruling the charts with their global hits recently. Under Beluga Heights Entertainment, Mac has begun working with Jason Derulo (“Whatcha Say”), Lyaz (“Replay”) and Auburn (“La La La feat. Lyaz). Alongside Beluga Heights, Mac has also been in close contact with Warner Music Group, looking at the idea of a possible independent label deal.

As if he has not already swept us off our feet, Mac has also laid out some pretty tough groundwork to top for MC; Nicki Minaj’s hot blonde competition- Chanel aka CC, Tiffani Anderson and Rachel Lauren. Oh wait; I think I forgot to mention the fact that Mac is also currently co-producing a song with the infamous JR Rotem who produced those hits you still track back on your iPod like Sean Kingston’s “Beautiful Girls” and “Take You There”, Leona Lewis’ “Better In Time”, Rick Ross “The Boss feat. T-Pain” and of course Jason Derulo’s “Whatcha Say” and “In My Head”. There are another seventy I could count but this is really just to emphasize the plateaus Mac has surpassed lately.

One of a Kind Music Producer

What Mac brings to the table is his extremely unique methodology when it comes to making the music and shaping the individual sound for an artist. Mac has the ability to understand any artist and create music by acknowledging their background, listening to their sound and taking their feelings from their writing and matching it cohesively.

If you take for example a top producer in the music industry today, like Dr. Luke, the one thing Mike possesses over him is his ability to work with a very wide spectrum of artists. Dr. Luke has created a large handful of hits today, but unfortunately the hits are mostly all Pop or Hip-Hop. Mike has created some powerful songs for artists that range from an MC to a Rock group to a Jazz singer to a Rap artist to a Hip-Hop and Pop sensation. That was one of the first characteristics I noticed when I had Mac send me over some of his recent work to use on his video interview. Every song hailed from a completely different artist, yet the songs were all delivered in an equally powerful form. You can hear Mac in each of his tracks.

Every detail of his work has a profound meaning. Mac creates the kind of music that really enables you to think. It’s music that opens your mind to different thoughts. For example, “Bottoms Up” is a hot party jam, fun to dance and sing to, but it’s not exactly the song that is going to make you think of today, tomorrow, next month or next year. When you first hear Mike Mac’s music despite whatever genre you are used to, there is a good chance you will stop to really listen because of the precise instrumental, rattling beats, alongside sounds you never knew existed until now. The work done by Mac isn’t just another song; if you listen you can feel the song, the emotion and the artist within the production. Like any book or movie, the best songs are the ones with an intriguing, catchy HOOK. Something that leads in. For example our favorite donkey douche Kanye West does an amazing job at this in his newest album. It’s like the album as a whole is the soundtrack to a movie. Not just a compilation of songs. Mike Mac does the same work.

When I asked Mac if there was any constructive criticism he could be thankful for, he went on to tell me about how he was once told that in regards to his sound he needed to make it [his sound] clear and when the drums hit, he needed to make sure they hit big. He was told to make it so that the listener could feel everything. It just so happens one of the things I like most about Mac’s music is the way he integrates his drums into each piece of work. No sound is just another background noise when it comes to the hits created by Mike Mac. Each sound is original and unique unto itself. When Mac’s drums hit, you can absolutely feel it, in every song.

HIA: How did you get into the music industry?
MM: I had my first beat making program called Fruity Loops, like everybody else … I used that when I was a junior and senior in high school. I started to kind of dive into the whole beat making game back then, but as I got older I realized I couldn’t make hit records with Fruity Loops. I was ready to try something new… to get that better sound, so I got Reason 3.0 and after Reasoning I got Pro Tools, which was the best thing I could possibly do. I’ve been working with Pro Tools ever since my sophomore year in college. So, as I started to learn more about Pro Tools I started to get more plug-ins and cool little things and really got to learning about production as a whole rather than just beat making. I mean… I’m a music producer I don’t just make beats, I make songs, I make masterpieces and in order to produce a song you need to know how to mix, you need to know how to record and you need to know how to arrange things. So it’s not just about making the beat it’s about making a full song and realizing how that song is going to be delivered to that audience.

HIA: When you’re producing do you ever pull things from legendary artists or from music in history?
MM: Oh for sure, I’m a big fan of the 80’s. The eighties are the shit… I love the 80’s because their hooks are so big and I really like big songs. That’s kind of where I get my sound from. Just off of how big each song from the 80’s was, production wise, song writing how it was put together, the 80’s to me?… I mean it’s good and bad- I was born in the 80’s so it’s always great to say that I love the 80‘s because that’s when I was born. I’d say I draw a lot of inspiration from the band Styx, bands like Guns n’ Roses, ACDC… bands that back then really focused on the overall production and just making that song sound huge, like stadium music to where it just seems like King Kong is in your speakers trying to break through and talk to you and stuff! So I really like that really big sound.

HIA: Are there any stigmas good or bad about being a white music producer?
MM: Not really, I mean sometimes people don’t expect me to be as good as I am when it comes to producing rap music, because it’s kind of like, not a white mans world, I guess. But just as society is changing and progressing same thing goes for music, it’s becoming less colorless. That’s important because no one should really care or it shouldn’t be an issue what color you are because, I mean- sooner or later we’re all going to be looking the same anyway. And to be honest, it really doesn’t matter I just have to put on a whole lot more sunscreen than other people. So, I mean when it comes to that it doesn’t really matter but is there a stigma? To some degree, people look at me a little bit different when it comes to producing in the rap industry; it’s just all about proving yourself. If you show that you can do something it doesn’t matter what color skin you have or if you’re handicapped or not handicapped or if you have one arm and two legs or two arms and no legs. It doesn’t matter, if you’re good at what you do people will respect that.