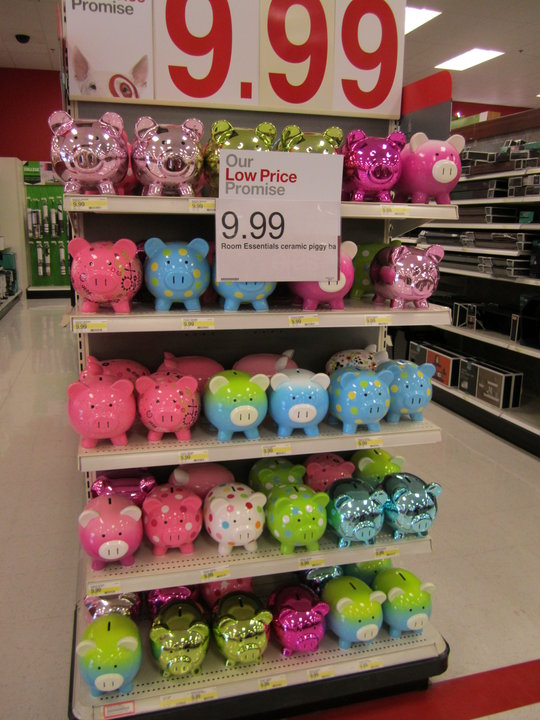 So it all began 3 years ago when I studied in Salamanca, Spain. During class our teacher had a little silly orange and green piggy with sunglasses on, which you would have to feed him if you spoke English. His name was Paco. At the end of the semester Paco had eaten so much of our money our teacher took us all for Pizza Hut- which being in a country with NO American food, we thought we had won the lottery!

You may have noticed by now that any pictures I take myself have my little silver pig named Pierre is in the picture. Its kind of like how dogs mark their territory by peeing on everything that exists… or when photographers stamp their logo sheerly over all of their work. Pierre will let you know where my work lies. If you see my silver pig creeping around in the background of a picture… there is a good chance it is a photograph taken by your one and only, me. I bought this little tubby guerrero from Target back in May when I decided because I didn’t have a job that made enough money to go straight to the bank with, I figured I would go old school saving for my two goals, which, right now are an imac and a new car- and feed my pig each night with stray money. I have yet to let my pig out to go to the bathroom, but he is getting pretty heavy so I know the time will come soon enough. 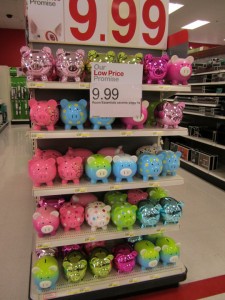 Look at all the pigs that need a home at Target! Adoption starts at only $9.99

It was none other than my Aunt, who shines, sparkles and gleams more than I in all her jewelry and bedazzled clothing, that informed me of all the piggy’s popping up in local hot spots. To be honest when I was a kid i never had a pig… me and my brother instead had my size crayons with little slits at the top. Its size was ridiculous- and it was actually depressing, never being able to fill it enough to actually empty it. I think I actually used to empty some of my brothers into mine just trying to fill it up. Go figure. 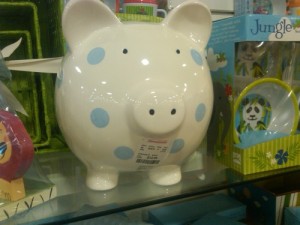 This big ball of polka-dot coin fun is from Home Goods!

Anyway, I think these Piggy’s are good for an array of occasions and if bought in the right color or style can be put in different areas of your home. For example it would be cute to add into a baby shower gift, a little kids birthday, a graduates gift, heck I would give it to half of my friends. Maybe not a guy my age, unless it came in black matte- like the batman car. But other than that I think this is a total steal. I could see my mother giving this as a gift with 354,346 quarters in it (equivalence of $50) just as a joke to one of my cousins for graduation. Come to think of it, not half bad an idea- somewhat like a money tree? So now that you know how hot these shiny little animals of fun are, you can go look for your perfect pig. My aunt found one at the Home Goods Store and a whole pigpen of pigs at Target. As I mentioned earlier, I bought my pig at Target, but you can find them pretty much anywhere. If you are feeling creative or want to personalize your pig, I know for a fact they supply ceramic ones at Color Me Mine, just call ahead. 🙂 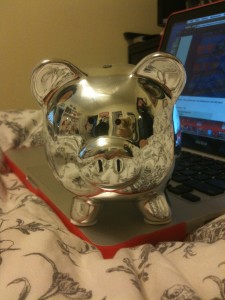 Pierre the Pig watching my laptop 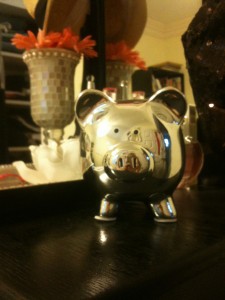 And of course, piggys will look good on just about any furniture piece.