Oops… She Did It Again

Watch the video first… then read on.

I don’t even know where to begin. I’ll make this as brief as possible because I’m sure what I see in this video is just as clear to everyone else. (Hopefully) First of all, could the product placement in this video get any worse? If you aren’t already aware, the newest trend to hit the music industry is video branding. The king of this right now is Adam Kluger who does fabulous product placement in the videos of artists such as Lady Gaga, Ke$ha, Jason Derulo and plenty of others. Now I’m not trying to knock Kluger because of how obviously bad the product placement was in this video, I mean everyone gets paid as long as the brands are in there, but seriously- horrible is all I have to say. Granted it is a horrific song. I was actually waiting for the video to air to see if I POSSIBLY could try to like this song. But I can’t. It’s not only annoying, lame and something that is closer to SClub 7 status, but there is NO plot, no main idea to the song, the video makes no sense. It is just all over bad.

It starts like we’re seeing a re-make of “Oops I did It again” and then the whole promotion of her radiance perfume takes the video off to a horrible start. After that, all I noticed was all the horrible paid promotion in the video… Makeup Forever, Plenty of Fish, Sony… too many to name. Her wardrobe is a major malfunction, bullets to a wedding dress to a cocktail dress to another Oops I Did It Again outfit. 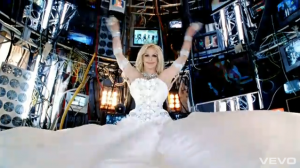 Best lyrics
[ Hey,you might think that I’m crazy, but you know I’m just your type]
Ya, I think you’ve completely lost your marbles Brit to be honest. What on earth does this song mean? What are you talking about? Are you coming off too strong on Plentyoffish.com? If you said your heart was beating loud and you wanted my body now why on earth would I hold it against you? Please clarify.

Being that I have a pretty strong marketing background I know that at USC when we had to include certain sponsors and companies/ brands into athletic games, part of the package was making it so that those brands like Coca Cola were PART of the athletic game or team, we didn’t make it seem like it was a brand and we were OBVIOUSLY doing promotion for that company.

When you see a video for any artist and you see them carrying a certain bag or wearing a certain brand, it is supposed to make you go out and want to buy it if you are a fan of that artist. Brit’s video not only makes me never want to smell her perfume but really makes me look down upon Sony, like the economy has hit you so hard to have to promote in this shitty video?

All in all I couldn’t tell you what confuses me more the plot, the paint on her dress at the end, her fighting herself or the confetti during her last ‘Oops I Did It Again’ dance routine.

At least the ending makes sense with the big ass closing question mark :)…?

Let me know your thoughts…

Also here is Ke$ha’s video below which Kluger also worked on, far better product placement. Unless you actually know the products and the work Kluger did I doubt you’d even take it as Music Video branding.

In this video Kluger branded Plenty of Fish and Tequilla Revolucion