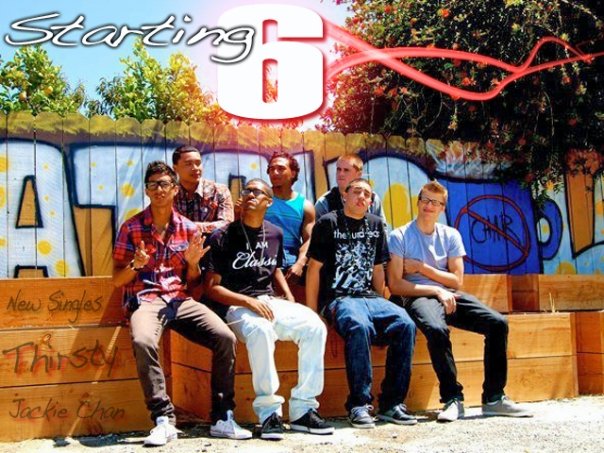 Six Guys in six cities. How do they do it? I mean, how do they find the time between school and work to make the music, produce it, create the most straight forward and happening lyrics, record it, perform it and promote it? I still do not know the answer to this question. But what I do know is that six minds coming from six different places with one clear mindset and goal makes for a whole lot of talent, surprise and things to look forward to. 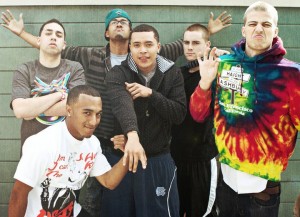 Growing up together the six; Big Steve (Steven Yaris), Fess (Robert Stewart), Grey Goose (Greyson Tarantino), Riggz (Jared Richmond), NicNac (Nicholas Naculous)  and RyBread (Ryan Bremond) attended the same high school together in Berkeley California. As music being a mutual passion, what started as a weekend thing; getting together in ones basement, making beats and then pairing them with real life lyrics, blew up into a movement during the summer of 2009 with the hit song “Thirsty”.

For only releasing a handful of hits this past year, the group has collaborated with big name artists that have had their own hits rise overnight. While it seems like just yesterday Nic Nac was doing some work for fun with high school friends; The Cataracs, this band has reached #3 on the Billboards Hot 100 with “Like a G6”. Other artists you may recognize on some other Starting Six tracks and videos include Bobby Brackins, Feez, Young Murph the Kidd, Young Janky, Shugz (originally in a group with Bobby Brackins called GO DAV), Dem Franchize Boyz, and Young Roy. These are only a few artists to name, the amount of other artists they have been inspired by and have worked closely with is even greater.

Lookin’ For a Nut

When I first heard the song “Lookin’ for a Nut” I was hit with a flashback from college. Walking into a fraternity party, where the living rooms dirty diaper smell didn’t seem to affect anyone. As I walked deeper into the mob of socialites, waste cases and frat donkeys the two thoughts that graced my mind were “I need more to drink” and “Why are all these girls so dressed up?” as we moved down the Greek row at my college the one constant was the girls and their hunt for the perfect man. Or, should I say one that would deliver by the end of the night. The girls ranged from those dressed up to go to a formal event to others walking down the sidewalk barefoot, heels in hand. I mean, if you were to put the girls and guys into an episode from five decades ago, the public would be appalled, but when did anything ever stay the same? As we move into a new year, the way women value themselves and the way men value women is only going to change more. It wasn’t just at the college I attended that this was apparent. At colleges worldwide, the focus in a girls mind on a Friday night is the same focus a squirrel has moving into November. Must find that perfect nut. Why even bother going out if that’s not what you’re looking for? Why would the squirrel go out in the cold rain if they already had a nut? It’s kind of the same theory that goes hand in hand with the disappearance of your friends when they have found their one and only… for the time being.

So, after hearing the song “Lookin’ for a Nut” I was hooked on this band. I mean, we’ve all heard the songs about guys who are in love with strippers, big booty’s and shakin’ it on the dance floor, but a song that so acutely depicts the college scene nationwide is something more palpable, something students of this decade can relate too. If you think about the big artists of the 1960’s; Aretha Franklin and Nat King Cole, they produced art based on what was relevant at that time. Women were not being respected by men at work or at home which is illustrated in “R-E-S-P-E-C-T” and “Chain of Fools” as well as in Nat King Cole’s “Unforgettable” and “When I Fall in Love” was obviously in regards to finding that perfect woman and spending the entirety of life in love with her. Obviously, times have changed tremendously. I make this a substantial point in this interview because I feel Starting Six stands out as a group rising above other mainstream artists with their own beats Produced by one of the six’ Nic Nac and their lyrical content based on who they really are, what they do and what they know.

Some other hit songs by Starting Six include “Thirsty”, “Paper Planes”, “Jackie Chan”, “Breakfast in Bed”, “Mona Lisa” as well as their newest hit “Ride Me Sexy”. I am never one to judge but going into the interview with six college guys, my initial thoughts were [“Great, I am going to interview an uncooperative boy band of meat heads”]. I couldn’t have been more wrong. The difference between these guys and the twenty-something year old guys we run into on a daily basis is the fact that the guys of Starting Six hide nothing. If you ask them how it is, what they look for, or what they are after (as I did in the interview) they give you the real answers. The answers you can’t seem to get out of any other guys. Just for a second put yourself in the shoes of a 23-year-old male, are you interested in finding your wife tomorrow? Or what about abstinence until marriage? Truth is, it’s 2011 not 1955. That doesn’t mean we have to throw away our values but ladies, you need to wipe your windshield.

If you are a male reader, I’m sure you’re nodding your head to the questions and answers in the interview. While female readers might be slightly dismayed at the answers, fact is that the majority of you have all gone out at some point lookin’ for a nut. Whether it is immediately after a split with your boyfriend of 2 years or if it is as a means of fulfilling your needs. And don’t say that you have none. That is a lie. What I was hoping the questions and answers from this interview would bring would be a clearer picture to girls out there looking. If you are lookin’ for a nut, continue on. I give you props for knowing what you want. For those of you girls going to these types of parties, claiming you’re not looking for a nut but a guy you can click with and form some sort of relationship with, Hunny- you’re in the wrong place. Sure, it’s possible to meet the guy of your dreams at a party, but as Nic Nac speaks his mind, girls are going to these parties, the same places where you would find the guys of Starting Six and they are looking for the same perfect guy they see in the movies. This not only won’t happen, but ladies you’re really stressing these single men out.

With that all said, you can watch the interview with the guys of Starting Six below as well as find a few of their music videos. I hope you enjoy, I will keep updates as much as I can on future performances.

Starting Six “Lookin’ For a Nut”